Walking on the Wild Side 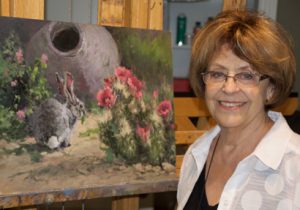 Linda Budge is a painter and an animal lover who combines her passions for art and living creatures to produce works that radiate empathy and painterly grace. Her extensive knowledge of animals and deep experience interacting with them explains her uncanny ability to capture her subjects so accurately; and also helps to explain why her work carries such emotional power.

Linda’s story begins in Salt Lake City, Utah as the youngest child of three. Her summers were spent in Brighton at a cabin where Linda was surrounded with breath taking scenery; spruce and aspen trees, deep blue lakes, streams and ponds. She and her brother spent most of their time fishing, catching tadpoles and building elaborate cages for the mice and chipmunks they captured. Childhood experiences that led to a lifelong fascination with animals.

Linda recalls, “I was only 12 when I won a poster contest showcasing three white rabbits. At that moment, I knew that I was going to be an artist!…In high school, I became popular during elections and sports. I could draw, had a good sense of humor and could climb ladders without fear. The ladders, of course, were important for hanging banners.” 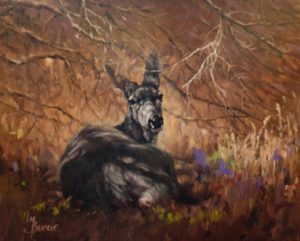 Junior year at Utah State University became an exciting time for Linda, as she was introduced into the world of art. It gave her a foundation that she would later build on. That same year, she met and married her husband, and that following summer they moved to St. Louis, Mo. Linda enrolled in the Famous Art School, taking correspondence classes. For the next couple of years, Linda would spend weekends and evenings studying the elements of art and a wide variety of mediums.

Her husband’s job took them to Laramie, Wyoming. Moving to Wyoming proved to be a blessing in disguise for her art career. She spent time in the wild, observing, sketching and painting animals and the lush scenery that abounded in every direction.

She says, “I like to capture a gesture, an attitude, or an expression. My paintings should be a story told in each piece.”

It was also during this time in Laramie, that Linda started making life long habits of taking workshops from artists that she admired; studying books on technique, visiting museums and attending art shows. Linda has often talked about Carl Rungius, and the inspiration that he gave to her through his books and paintings.

Later, upon moving to Colorado, Linda continued painting, although her career took a surprising turn. She was hired by a publishing company to design veterinary reminder cards, and she signed a contract with Hamilton to do a series of collector plates portraying Golden Retriever puppies. Ducks Unlimited asked Linda to design several limited edition prints with Labrador Retrievers. She had added dogs to her list of animals. Now living in Arizona, animals that appear in her pieces are the wildlife common to the south western United States: cottontail rabbits, desert bighorn sheep, mule deer, wild burros and the desert gray wolf. 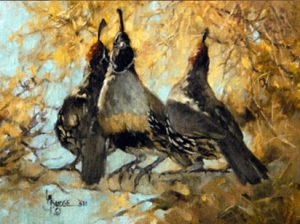 Linda’s ability to depict the nuances of animals so precisely is no accident. Her love of animals and intuitive relationship with them allows her to form an emotional connection with her subjects, which comes across clearly in the painting. She has a broad practical and academic experience with animals including a stint handling show dogs professionally, some courses in anatomy and a wide exposure to the minutiae of animals in their natural habitat.

Linda spent years developing her technique and style. To look at her paintings, one is caught up with her fascination for light and edges. She moves, changes, adapts and creates, so that all of her paintings show a strong sense of design.

She says, “I am always fascinated with how shapes, value, colors and edges can enhance, direct and orchestrate my choices.”

Linda has won numerous awards for her art and pieces of her work can be found in the permanent collections of several libraries, museums and corporations. One of her highest honors was a painting commissioned in 1983 by the State of Wyoming as a gift to President Reagan. Linda herself presented it to the President. The painting, of antelope, hung for many years in the living room of the President’s California residence. It was moved by the President himself to the Reagan Library in Simi Valley where it remains to this day.

Linda has spent a lifetime honing her skills as a painter and cultivating her love for animals. Every new picture and every interaction with another critter has enhanced her knowledge of these animals and birds, and her ability to portray them; and has provided those fortunate enough to have seen her work, a unique, even revelatory, glimpse into the animal kingdom.

Do you use a camera?  This is a question I am asked rather frequently.  Absolutely!  Animals do not pose! But that being said,  I do not copy or project an image.  I use a camera for reference and accuracy, and even inspiration.  I have taken anatomy courses, studied animals in the wild, sketched them at the zoo, and taken innumerable workshops and classes.  I feel very comfortable moving legs, twitching an ear or tail to create emotion and expression.  I have also found that my audience prefers correctness and precise drawing.  By utilizing my ability to draw, I can create the scene that I have visualized. 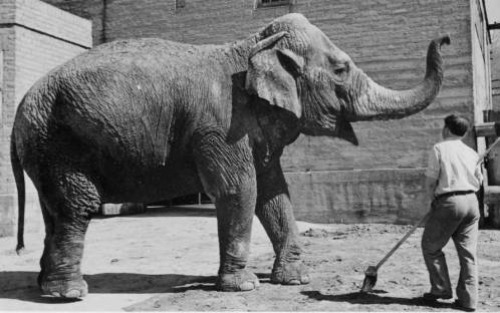 Years ago, when I was a little girl, I would ride my bike to the Hogel Zoo to visit Alice an Asian elephant.  I was enthralled with her.  I would always share my peanut butter and jelly sandwich with her, thinking to myself that one day I would own an elephant.

Well, I may not own an elephant, but I can certainly draw one.  Painting an elephant or in my world today, painting a mule deer, or a coyote, a bobcat, rabbit or burro, gives me the same pleasure I had as a child watching Alice.

I can’t imagine doing a painting without an animal or bird of some sort.  It has been a constant theme in my art, and it is foremost in my mind when I start a new painting.

Since, I can’t commandeer Noah’s Ark, I can love animals by painting them; leaving a legacy of their existence and hopefully bringing to the viewer the same joy that I experience painting them.

Linda at the Reagan Presidential Library in Simi Valley, CA 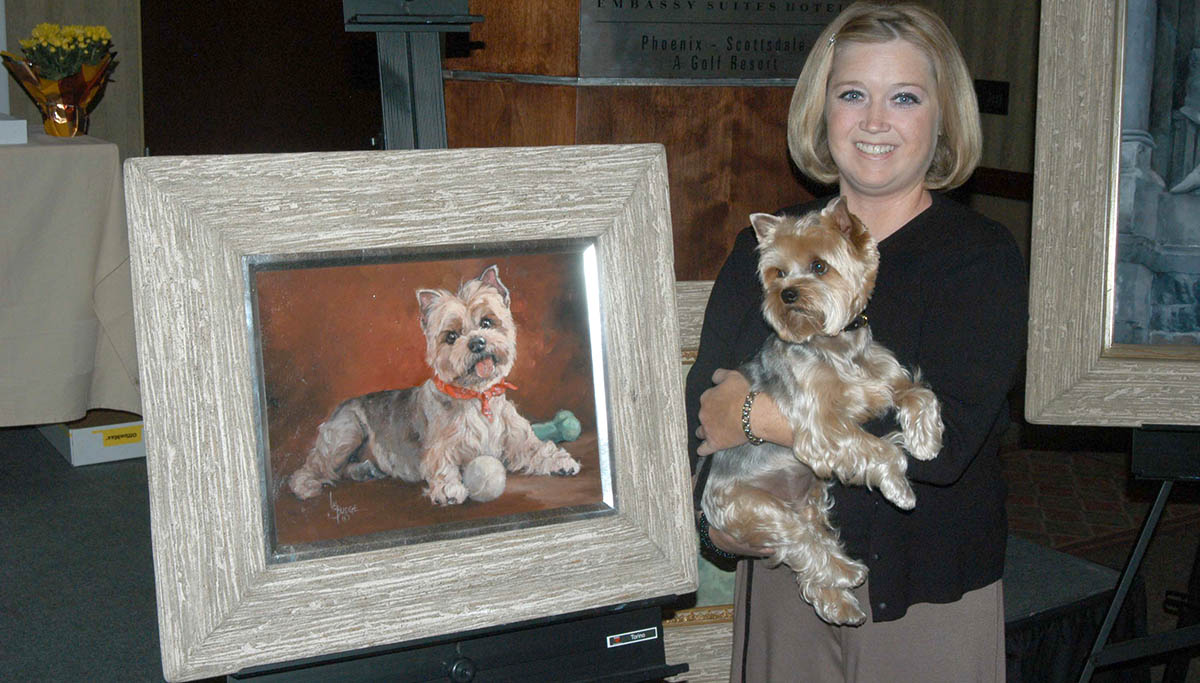 Me. & Mrs. Eliot with portrait of Susie